Spent the afternoon at the Eastern Division HQ of Surrey Police at Reigate police station. Was warmly welcomed by Chief Superintendant David Miller. He and his SMT were generous with their time  in explaining how policing is having to constantly adjust to changing social behaviour as evidenced by immigrants running from lorries at the M25 service station and organised crime creeping into Surrey from London and never mind internet crime (and budget reductions) . Their theme was they had to catch and prosecute criminals but equally important is their community activity to work with those at risk of entering the judicial system.  I was very heartened by this rigorous  intellectual approach but with some heart and lots of innovative approaches. Also visited 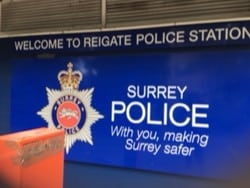 their Salford Custody unit and was taken on the journey from arriving in a police car to being locked in a custodial cell: not to be recommended!