This is not a High Sheriff blog but I hope still of interest. We attended in the Lambeth Palace Chapel the Licensing of Lt Colonel the Revd Nicholas Mercer as Rector of the Parish of the Falkland Islands and Priest-in-Charge of Christ Church Cathedral Stanley. We know Nicholas and his family through various Rudgwick and Scottish connections but more importantly were able to advise him about the role in the Falkland islands before he decided to accept the challenge. We had visited the Falkland Islands a number of times 10+ years ago and became friendly with the then Rector who on return to the UK became Chaplain of Sedbergh School (when I was Chairman of the Governors). We wish Nicholas all the best. 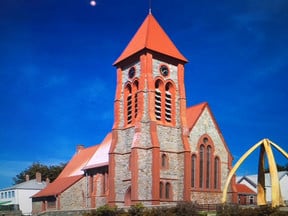 4 Bishops in Prison
Scroll to top